Looking around the Deal Extreme website is like looking around a dodgy backstreet version of Maplin, full of special screwdrivers to open up your consoles with, replacement console cases and other gizmos and gadgets. Itâ€™s the quirky looking handhelds that have made me want to put together this article, although you might end up in hell for playing them – many contain naughty illegal ROMs and the like. 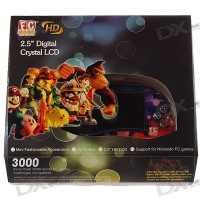 The Conny Pocket Dream Console is one of the few handhelds on the site that contains unique built-in games; the screenshots certainly donâ€™t look too bad. It has 100 games built in, can be connected to a TV and has a 2.5â€ TFT screen. Price? $65/Â£40 to you, sailor. A similar and cheaper product is the FC 6000 which comes with a cartridge full of NES games. The boxart features artwork from Smash Bros. Brawl. If Shigsy saw this heâ€™d probably cry.

Cheaper still is the snappily named D-Cat 8 Game Console with 100 NES games built in. Itâ€™s a stupidly cheap $20 (about Â£12) but Iâ€™d imagine that the build quality isnâ€™t great. A forum member has posted a few photos – one of the games included is Bomberman and thereâ€™s also a hack of Mario Bros. called Shrek Bros. Madness.

Now weâ€™re getting into murky territory. The name of this console isnâ€™t even mentioned – it just looks identical to a GameBoy Advance SP and has SP2 on the lid. Thereâ€™s no cartridge slot but you can download NES, SNES, GBC, GBA and Neo Geo games on it. The GameBoy Advance SP seems to be a popular console to clone. The GB Station Light is cheaper ($28/Â£17) and has a cartridge slot but can only play NES games. The menu screen features a taunton from Star Wars, but that doesnâ€™t mean you should buy it. Another nameless console is also on the site – itâ€™s a clone of the original GBA, has a cartridge slot for GB and GBC games and has a load of GBA games built in. Unlike the original GBA though it has a rechargeable battery. $56/Â£34 is the asking price.

Itâ€™s not just Nintendoâ€™s handhelds that have been cloned; hereâ€™s one that looks identical to the PSP. $59/Â£37 gets you a console that has a camera, plays videos, MP3s and retro games but not PSP games. People say that the screen is very good which isnâ€™t something youâ€™d expect.

Finally thereâ€™s the Dingoo A-320 while appears to be the granddaddy of all of the above, able to play just about any ROM you throw at it plus music and videos. Deal Extreme compares the design to a GameBoy Mirco, although Iâ€™d say it looks more like the bottom half of a DS Lite. People who have brought one seem to be very pleased so if you do fancy having something in your pocket that isnâ€™t a PSP or DS this could be a good choice. After all, it’s not illegal to play ROMs, MP3s or movie files of stuff you actually own.