Microsoftâ€™s X10 press event is underway. Halo: Reach, Lost Planet 2, Fable III, Crackdown 2, Alan Wake and more got an airing but the real big news is that most of them now have release dates. 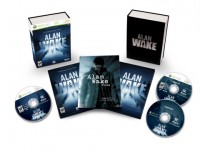 The long awaited Alan Wake is set for a 21st May release in Europe; Americans get it a few days before on the 18th May (the same day as Lost Planet 2, incidentally). Those that pre-order will receive an avatar outfit, a making-of video and a dashboard theme. If you really fancy splashing the cash though, then thereâ€™s a limited collector’s edition with a bonus disk containing behinds-the-scenes footage, hints from the developers, a soundtrack, and a book called The Alan Wake Files. The gaming press arenâ€™t allowed to post any impressions or previews of Alan Wake until 18th February, although there is a video already up on YouTube.

The Halo: Reach beta also starts in May. 3rd May, to be precise. Bungie are promising it to be the biggest console beta ever. If you want in, then youâ€™ll have to go out and buy Halo 3: ODST to get access.

The press werenâ€™t allowed to take photos of Fable III either. Earlier this week Molyneux said players would be â€œpissedâ€ to hear about one of Fable IIIâ€™s features. So what is it? Thereâ€™s no health bar. Seriously – that was what all the fuss was about. This time round the game is set in Victorian industrial revolution England and you play as the son of the hero from the last Fable. Weapons will now morph depending on how you use them – If you kill innocents, it will drip blood; if you use it to protect people it will glow.

Much like Alan Wake, Capcomâ€™s Dead Rising 2 – which is being put together by US studio Blue Castle – has been knocking around release schedules for ages too. 3rd September is now the official date, but you wonâ€™t have to wait until then to be able to bash up some zombies – August will see the release of Dead Rising 2: Case Zero, a downloadable prologue exclusive to Xbox 360. Thereâ€™s a video of the game in motion over at Eurogamer.

March is looking busy for Xbox Live Arcade – Perfect Dark, Toy Soldiers, Scrap Metal (a new game from N+ developer Slick Entertainment) and the Games Room arcade (aka “The Microsoft Points Whorehouse”) will all be available during next month. Ubisoft are also working on an Xbox Live Arcade title called Bloody Good Time, which has something to do with a bunch of teens fighting it out for a part in a movie. The official website promises more details soon.