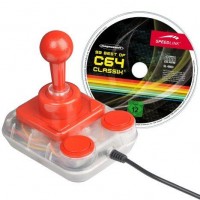 Ninety nine games for Â£9.99. Sounds like a good deal, doesnâ€™t it? Now what if I told you they were crusty old Commodore 64 games, albeit good ones that people may remember like Bomb Jack, Ghouls & Ghosts and Paperboy? Still interested? Then youâ€™ve probably got a soft spot for all things retro. Which is good.

The Speed Link Competition Pro USB PC joypad – which comes with a disk containing 99 C64 games – is available to pre-order now on Play.com, with a mooted 19th February release date. No drivers are needed, claims the blurb.

Thereâ€™s a few licensed games on the disk too, such as Gremlins and Thundercats, which makes me wonder how official/legal the contents of the disk are. As such it might be an idea to get your order in now before it gets pulled.