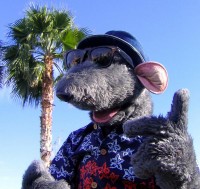 Rat fans rejoice! The Sharpe Company have managed to gain the rights to legendary 80â€™s rodent Roland Rat and are looking to license the character to any willing developers or publishers.

Ideal scenario: Blizzard make an MMORPG for PC and consoles, involving countless clones of Roland Rat, Errol the Hamster and Kevin the Gerbil running riot in the TV:AM studios.

Most likely scenario: Blast Entertainment, Midas Interactive or Zoo make either a half-arsed 3D platformer for the Wii or a collection of shoddy mini-games for the DS.

If somebody takes them up on their offer then they won’t be the first to make a game featuring Roland – Ocean released Roland’s Rat Race on Commodore 64 and Spectrum back in 1985. It was a bit rubbish.