I have a friend still has a PS2 as his only console and recently I asked him why this was. Was it the high price of the PS3? The fact that Xboxes tend to explode if you actually play them? Was it because the Wii is utterly tedious? No, he said. He said he hadn’t upgraded yet because there were no decent JRPGs this generation. He bought a PS2 for Final Fantasy, kept if for Dark Chronicle and clung onto it desperately for Personas 3 and 4. This generation of consoles has brought nothing but crap, he said. 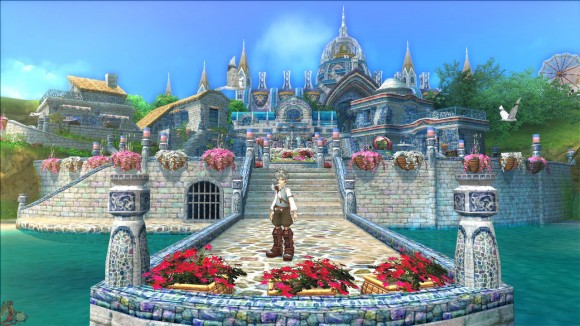 I was astonished. What aboutÂ Eternal Sonata, I said, hoping to pique his enthusiasm. He’d never heard of it. Oh, I said, you’re in for a treat.

Eternal Sonata is mesmerising, and that’s Â just theÂ incredibleÂ graphics. Â They’re bright, fluid and clear and the characters are a celebration of excessive Japanese RPG excess and ponce, the exact opposite of the current trendÂ off gruff space marines and grey backdrops that populate almost every single other game out there. Blue skiesÂ overlook glistening towers, swathes of grass move in the wind, waterfalls drop, even the evil creatures look beautifully rendered with smooth textures and sharp outlines.

Then there’s the story. It’s an allegorical story about the Polish revolution during Chopin’s life, global warming and possibly even a comment on current world events and the Iraq war. It’s deep, satisfying and at most times utterly incomprehensible.

TheÂ game takes place in a typical Japanese fantasy land that Chopin is dreaming while he lays dying in his bed. Polka one of the only people in the land able to use magic, and she’s out to try and stop the production of mineral powder, which is hurting the traditional floral powder’s sales. So far, so typical. However what sets Eternal Sonata apart is the wistful and melancholy atmosphere it creates. At once both uneasy and beautiful, like the compositions of Chopin himself.

I know that now. You see before I started the game, I knew nothing about Chopin. I didn’t even know he was Polish. Luckily then, the game gently educates you about him. The love for his music is really evident throughout, and chapters of the game are broken up with interludes telling you the history of Chopin and playing his compositions. Passion for the man and his music seeps out of every pore of the game, and it’s infectious. Needless to say, the soundtrack is fantastic.

The other thing is, it’s not too long. I love JRPGs but they can often get bogged down in unnecessary 100 hour quests that grind you down. Eternal Sonata will set you back 25 hours if you’re sightseeing, which means most people will get to see the end. Plus, for completionists there’s massive replay value. You’ll have to play through at least 3 times to get all of the achievements on offer.

So if you like JRPGs, you should really pick up Eternal Sonata. I’d even recommend it as some one’s first JRPG. The battles are real time, fast paced and accessible, all of which make it a great first JPRG. Sure, there are times when it presents you with really annoying mazes, and the voice acting is patchy, but it deserves to be played and enjoyed, not ignored and left to rot in bargain bins.

I said all of this to my friend. I persuaded him to get a 360. I put the pad in his hand. He attacked it with enthusiasm and gall. He hated it. Pfft.