Sonyâ€™s E3 conference started by confirming that the PlayStation 2 isnâ€™t dead yet, promising 100 new games out this year. All well and good, but whereâ€™s the new stuff that people actually care about?

How about this little lot: a motion detecting wand for PlayStation 3, Resident Evil Portable for PSP, the PlayStation 3-exclusive Agent from Rockstar, Final Fantasy XIV: Online, ModNation Racers and The Last Guardian. Not a bad line up at all.

Sonyâ€™s motion controller – which works in conjunction with the PS Eye camera – apparently â€œfar surpasses any technology on the market now”. The early prototype comprises of a stick with a colour changing ball on the end that the PS Eye picks up on as you move it around. A demo showed a FPS where the wand was used as a gun and then later a sword. Sony hopes to have it out next year. 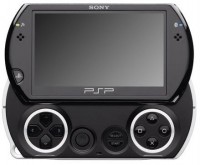 The UMD-less PSP Go (aka E3â€™s worst kept secret) got an official airing. It will launch in the US and Europe on October 1st for $249.99 / 249.99 Euros. Thatâ€™s the same price as the original PSP. PSP development kits have been slashed by 80% in effort to get more third-party companies producing games. Two big name titles were shown – Metal Gear Solid: Peace Walker and the all-new Resident Evil Portable. Peace Walker stars Snake and is set 10 years after Metal Gear Solid 3. Rumour as it that there will be four player co-op. Gran Turismo PSP is due for release in October. It runs at 60fps and has 800 cars and 35 tracks. And howâ€™s this for a nice surpriseâ€¦Final Fantasy VII will be available to download onto PSP this week. Ubisoftâ€™s Assassin’s Creed Bloodlines also has a date: 10th November. Itâ€™ll link up with Assassin’s Creed 2 on PlayStaton 3.

Microsoft may have bagged new GTA IV episodes but Sony have managed to snaffle Agent from Rockstar North. According to Sony it “will take a player across the globe amid the shallowy world of espionage and assassins in the darkest hours of the 1970s”. Shouldn’t that be shadowy?

United Front Games came on stage to show off ModNation Racers. Think LittleBigPlanet but with cars. Thereâ€™s a cartoon feel to it, with power-ups and crazy looking characters that you can create. The Last Guardian on the other hand couldnâ€™t be any more different – itâ€™s from the Ico / Shadow of Colossus team and looks like a combination of the two, featuring plenty of moss covered environments.