Last yearâ€™s Nintendo E3 conference was notoriously disastrous, comprising of Wii Sports Resort, Wii Music, Animal Crossing and little else. This year? How does two new Mario games for Wii, a new Metroid developed by Team Ninja and a sequel to Golden Sun sound? Sadly though, Pikmin 3 was nowhere to be seen. Maybe poor sales of the Wii re-releases of Pikmin 1 and 2 have killed that one off.

New Super Mario Brothers Wii was the first game shown. Itâ€™s four player and co-op based – if one player gets caught in a bubble, another player has to free them, for instance. The video showed Mario, Luigi, yellow Toad and a blue Toad running around 2D levels. Whether other characters will be available is unknown. Surely Wario and Peach would be more interesting that having two Toads? Thereâ€™s also a new propeller suit. There are screenshots on Nintendo’s official E3 website.

The second Mario game is a bit of a surprise – Super Mario Galaxy 2. More of the same from the looks of things, only now Mario can ride around on Yoshi. Itâ€™s out 2010. The new Metroid – known as Metroid: Other M is a whole lot more interesting. Itâ€™ll be the first 3D Metroid not developed by Retro Studios and digs deeper into Samus’s story. The trailer looks amazing and shows both third-person combat and first person shooting. Line Attack Heroes is another surprise, and is described as “a fast-paced, melee action game that requires quick thinking and smart strategy”. Endless Ocean 2 is self-explanatory. Span Smasher looks very quirky, almost like a sequel to KuruKuruKurin.

Wii Fit has sold 15 million copies, so thereâ€™s going to be a semi-sequel – Wii Fit Plus. Itâ€™ll be available on its own or with the board. New mini-games include juggling and leaping over logs. Joy. Staying with the keep fit theme, the Wii Vitality Sensor clips onto your finger to measure your pulse. Itâ€™s hardly new technology – Bio Tetris on the N64 came with an identical device.

More Mario? Oh go on then. Thereâ€™s two on the way for DS – Mario & Luigi RPG: Bowser’s Inside Story is set inâ€¦Bowserâ€™s insides. Mario vs. Donkey Kong Minis March Again is the other one, and will let you design levels. WarioWare DIY goes one further will let you design entire games. Itâ€™s all gone a bit LittleBigPlanet. 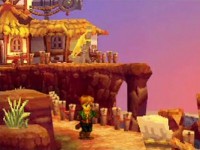 Movie maker Flip Notes Studio, Zelda Spirit Tracks, RPGs Glory of Heracles and Golden Sun DS (shot to the right, trailer here) Ubisoftâ€™s GTA-alike Cop: The Recruit and James Patterson’s Women’s Murder Club: Games of Passion were also shown on DS. The Xbox 360 isnâ€™t the only console getting Facebook connectivity either – soon youâ€™ll be able to take photos with your DSi and upload them onto your profile. A press release for Duke Nukem: Critical Mass for DS has just gone up too.

Mario, Zelda, Metroid – Nintendo have managed to tick all the right boxes this year. Well, maybe – a new Star Fox, Wave Race or Pilot Wings would have gone down a treat. But thereâ€™s always next year.