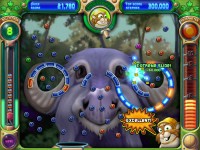 Popcapâ€™s newest edition to Xbox Live Arcade is akin to a cheese sandwich – simple but pleasing. With a cannon and ten shiny balls at your disposal, simply destroy sixteen orange pegs that have been randomly placed on the screen. With bonuses, power-ups and extra balls available for proficient pegglers (as Shakespeare once didnâ€™t write) itâ€™s just as satisfying as a cheese sandwich too.

Peggleâ€™s genius comes is several strokes. It foremost requires both luck and skill. Luck, because the orange pegs change location from one attempt to the next, so you might be fortunate and get pegs in easy to hit locations. Skill, because with a bit of patience and by lining up shots perfectly huge scores can be obtained. A safety net of sorts also constantly moves from left to right at the bottom of the screen – time things correctly and risky shots become less risky.

Adventure mode takes a couple of hours to finish, with each themed stage (space, underwater, magic, etc) giving you a new power-up to play with. This helps keep things fresh and once unlocked they can be used in multi-player. Itâ€™s worth looking at the layout of the boards before picking your skill – multi-balls are handy for boards with lots of close together pegs, for instance.

Considering the inexpensive Â£6.80 price tag the online aspects are surprisingly in-depth and polished. Duel Mode isnâ€™t anything fancy – simply share a board with a rival and take turns – but Peg Party mode is stupidly addictive. Four-players each have their own board and take turns, and at the end of each turn scores are compared allowing you to see who got the highest and lowest. It really makes you think carefully before firing the cannon, making every peg count. Not very competitive? You will be after playing this.

Itâ€™s hard to believe that none of the big publishers have tried to purchase Popcap yet – their back history – which includes Zuma, Bejeweled and Luxor – has seen puzzle fans waste many hours. But then again, itâ€™s also hard to believe that Iâ€™m zealously recommending a game that starts off with a greeting from a talking unicorn.