It’s the Game Developers Conference in America’s own San Francisco at the moment, and real websites remembered that King of Nintendo, Satoru Iwata, gave a keynote today.

It’s all right though, it doesn’t look like much of significance happened. Especially for game developers, who should surely have been the target audience. Never mind. 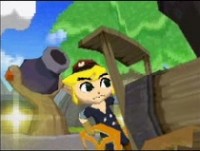 But! There’s a new Zelda game for the Nintendo DS on the way. It’s called The Legend of Zelda: Spirit Tracks, and features a steam train. This is excellent news, as my rubbish screengrab shows (scroll down this page to watch the video).

From what Nintendo is saying – which isn’t much, as far as I can see – it’s going to be an awful lot like Phantom Hourglass, albeit with the aforementioned steam train. STEAM TRAIN. I’m not entirely sure why it looks so cool to my eyes, but it does.