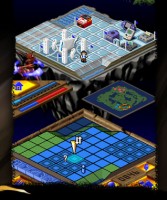 EA asked Japanese developer Genki to bring Populous to the DS for the Japanese market, but have ditched it by the wayside for the western world, leaving Rising Star to pick up the pieces. I donâ€™t know about you, but my warning bells always ring when a publisher wonâ€™t even touch one of their own games. Itâ€™s like a parent trying to disown an ugly child.

Genki arenâ€™t to blame for the shunning though – this is a decent conversion. The problem is that itâ€™s a decent conversion of a twenty year old game. Back in 1989 (the same year as the original Sim City and Prince of Persia were released, incidentally) this was top stuff. In todayâ€™s world though it both looks and feels incredibly dated. Having a tiny three-inch playing area doesnâ€™t exactly help either. It may have been what the PC original was blessed with but thereâ€™s no need for it now.

At least the concept is easy to grasp: flatten land with the stylus so that the inhabitants can build houses and castles. By doing this theyâ€™ll worship you and bestow ‘God points’ that can be used to unleash magic spells – including earthquakes and meteorites – onto your rivalâ€™s land. After a set period of time (or when youâ€™ve gained enough power) Armageddon commences – the world is razed to the ground and your worshipers meet in the middle for a massive ruck, which is nowhere near as exciting as it sounds. Whoever has gained the most followers will win the battle, and then itâ€™s off to the next world to do it all again.

Chances are though you probably wonâ€™t want to. The only differences from one level to the next are that the terrain you start with becomes rougher – making it harder to reshape – while the demons you face become more aggressive, using their landscape-ruining powers more frequently. Later levels have different textures applied, including a fantasy world and a retro console world, but they donâ€™t do anything to change the core gameplay.

EA usually have their heads screwed on when it comes to following current trends, so why they brought this to the DS instead of Bullfrogâ€™s other creations, like Theme Hospital, Theme Park World and Dungeon Keeper, is a bit of a mystery. Perhaps Populous has a massive following in Japan that we don’t know about?