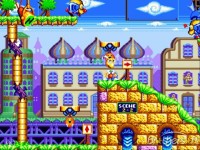 Itâ€™ll be a cold day in Hull – sorry, Hell – when Nintendo releases a 16-bit retro collection of this magnitude. So, letâ€™s use this review as a means to honour Sega for not being as stingy as Nintendo are with their primitive pixels. All together now: hip, hip, hooray!

There are plenty of reasons to be cheerful too. A generous forty games feature, plus five arcade games (Shinobi, Alien Syndrome, Zaxxon, Fantasy Zone and Tip Top) and two Sega Master System games (Phantasy Star and Golden Axe Warrior). Platform fans are well looked after with all six Sonic games present (Sonic & Knuckles has lost its lock-on function, mind you) along with Ristar, Kid Chameleon, Decap Attack, Vectorman and Treasureâ€™s Dynamite Headdy. RPG fans can also expect to clock up plenty of hours of playing the entire Shining Force and Phantasy Star catalogues.

The emulation is spot on, games can be saved anywhere you like and if youâ€™ve got something against jagged edges a filter can be added to smooth everything out. You can also view boxart and manuals (just the US versions, lazily) and unlock FMV interviews featuring Segaâ€™s creative talent from the 16-bit era. Itâ€™s worth pointing out, though, that these are the same ones that were on 2007â€™s Mega Drive Collection on PSP and PlayStation 2.

Most of the achievements represent little challenge to unlock (collect 100 rings in Sonic, talk to another dolphin in Ecco, etc), but at least theyâ€™re varied and only one requires you to play a game through to completion. That’s for Dr. Robotnikâ€™s Mean Bean Machine, if you’re wondering.

But what of the games themselves? Well, the early Mega Drive titles were never much cop to begin with, although the likes of Altered Beast and Alex Kidd in the Enchanted Castle still have a degree of charm. The platformers hold up well; the Golden Axe and Streets of Rage trios are much of a muchness.

The eyeball offending Fatal Labyrinth is easily the biggest stinker on here though – why Sega included it is a bit of mystery. Itâ€™s not quite an ‘ultimate’ collection either, as a few games that were on the last Mega Drive collection, like Virtua Fighter 2, Ecco Jr, Shadow Dancer and Sword of Vermilion are missing. Iâ€™m guessing Outrun has also been left out because of licensing issues with Ferrari. Fortunately, what has been included though is more than enough to warrant the Â£24.99 asking price.

Another three cheers for Sega, then.

BitWave are bringing Toaplan and Sunsoft classics to console and PC, including Zero Wing