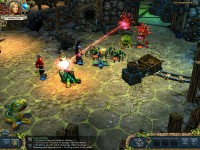 After devouring my way through Fallout 3, twice (best post apocalyptic RPG ever, by the way), I’ve found myself desperate for some RPG satisfaction. It turns out, particularly if you like your RPGs to be of a more statty and thoughtful nature, there isn’t a great deal of choice. I couldn’t just accept the prospect of going cold turkey though, so I had to get my fill somehow.

I decided to give Mass Effect a spin, and despite being everything I expected it to be (a slow, obtuse, dialogue-heavy Bioware game), I was pleasantly surprised. So much so that I spent a few days over the Chinese New Year holiday period blasting through it. My only complaints – it was over too quickly, and frankly, enjoyable as it is, the game’s entire premise is space opera bullshit.

So, with Fallout 4 but a distant dream, I scoured the web for an RPG to fill the void. Or rather, I looked to see if there were any PC RPGs in a similar style to Disgaea or Final Fantasy Tactics. Turns out, there aren’t really… but there sort of is!

Enter, King’s Bounty: The Legend, a turn-based battle RPG in the manner of Heroes of Might and Magic (well, that was inspired by the original King’s Bounty released back in 1991).

At first glance, King’s Bounty is a terribly generic RPG, with mages, knights and all the typical guff. That’s mostly because, well, it is that type. But it does it with a glint in its eye and a smirk on its face. The character dialogue knowingly mocks the game’s heritage and it does it all at a jaunty pace. The gameplay itself is rather good – turn based battles on a grid, with the usual character development. Though rather than develop a few fixed characters, your main avatar grows, whilst you control store-bought hordes of soldiers… it makes the characters a little more faceless and detached, one of the game’s shortcomings, but hey ho.

If generic turn based RPGs with a hint of moxy are your thing, then I highly recommend it. Nothing really comes close to Fallout 3, and it’s not really similar at all except in basic genre… Oh. But still, it’s quite good.