Remember when the PSone was fading fast and budget games (like CT: Special Forces, Yeti Winter Sports and Ballerburg) started popping out of thin air? It seems that the same is starting to happen to PlayStation 2: while browsing in Morrisons the...
Read Article
This Week's Games 30 January, 2009

The birds are having sex with the bees

This Week’s Games I hope you like animals, because EA’s SimAnimals on Wii and DS is the only game out this week. Papery thing NGamer quite liked it, comparing it to Viva Pinata. Next week is looking a bit more lively with...
Read Article
Blog 29 January, 2009

Sega’s Block Pipo looks like it’ll be one of those arcade games that you won’t be able to resist putting a quid or two in. Why? Because instead of joysticks it uses Lego-style bricks that you stack up onto the screen to...
Read Article
UK Charts

Lara’s still got it

This Week’s Games It’s not a very exciting week for new releases, but it’s January so you’d expect as much. Skate 2 for PlayStation 3 and Xbox 360 looks like it has built on the last game – which was very good...
Read Article
Blog 22 January, 2009

I must have been faintly aware that LocoRoco 2 was on its way, but its release around these parts in November last year passed me by, as these things have a habit of doing. It wasn’t until the deluge of sales emails...
Read Article
Reviews 22 January, 2009 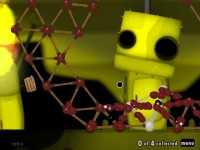 The problem with WiiWare – apart from Nintendo’s lack of quality control – is that many titles appear on the download service with a barely a whisper. World of Goo has had more publicity than most, but it’s still a shame that a game this good is going to go largely undownloaded. Which isn’t a real word.

Playing like a gooey mixture of LocoRoco and Lemmings, the idea is to guide goo balls safely to an exit pipe by constructing bridges, towers and so on out of the titular blobs. Physics play a big part – build a tower without a firm base and it’ll topple over, while bridges require supports and can’t be too top-heavy. While you build, white flying blobs appear that can be used to skip back in time briefly if you mess up, and there’s also the chance to skip levels entirely if they’re causing too much hassle. The mystical ‘sign painter’ also gives hints during levels. Whoever could he be?

Words for your eyes

GamesRadar have been on top form this month, with a bounty of features worthy of five minutes of your day. If it came in a tin, Game names corrected by spell check would do exactly what it said on it. The Top...
Read Article
UK Charts 20 January, 2009

UK Chart It’s official – nobody reads reviews any more. The Lord of the Rings: Conquest, which has been receiving middling reviews, goes in at #3 in the top 40 chart. It’s #1 in the Xbox 360 chart and #3 in the...
Read Article
Load more posts
Socially distance together in our Discord chat server - join now