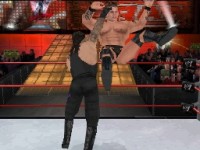 There arenâ€™t many fighting games for the DS (Ultimate Mortal Kombat is about as good as it gets at the moment) and although this effort isnâ€™t awful, itâ€™s too middling to recommend to anybody but WWE fans. Which makes this review kind of pointless – if Iâ€™ve learned anything over the years, itâ€™s that WWE fans are the type of people that would buy anything with WWE stamped over it, not to mention defend the â€˜sportâ€™ to their very graves. But thatâ€™s a rant for another time.

The main single-player season mode is slightly RPG flavoured, and is centred around an upstart wrestler out to make his fortune. Itâ€™s more involving than you might expect – you get to run around various 3D environments, talking to other wrestlers backstage and striking deals with the managers at the WWE HQ. At your posh apartment new items can be bought via a PC, while at the gym individual limbs can be â€˜levelled upâ€™ by playing mini-games, some of which require you to blow into the mic.

Once youâ€™re in the ring the four action buttons on the DS donâ€™t do anything apart from make a nice clicking sound. Instead, all your moves are controlled on the touch screen. Tap it to punch, draw a circle to grapple, rub it to get back off the floor or double tap on weapons on pick them up. It sounds like a recipe for disaster, but it doesnâ€™t work too badly at all. It would have been good to at least have the choice of button control though.

So whatâ€™s the actual wresting like? Well, this is where the problems begin. Thereâ€™s just no atmosphere once the entrances are over and done with. The crowd noise plays on a continuous loop lasting just a few seconds and thereâ€™s no speech or commentary. And because of the DSâ€™s limitations there are only one-on-one matches, so no royal rumbles or three man bouts. Shame.

At least itâ€™s a good looker, easily resembling the early PSone WWF games, and thereâ€™s plenty of content including 29 wrestlers (The Undead Tailor, Yellow Samuel, Chod, etc) plus a surprisingly in-depth character creator. You can even make blue skinned wrestlers with dog-like features and pretty red bows in their hair. If, for some reason, you wanted to.