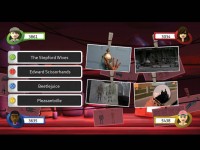 I love a quiz game. I’ve played most of the Buzz games and I can’t enter a pub without having a go on it’s Itbox, so I was really looking forward to Scene It. Was I disappointed? Well, yes and no.

First, the good. The presentation is – apart from the annoying voice overs with their awful, over-written banter – good. There’s a great use of cutely-animated avatars, however there are no pre-built characters to select, so a game can sometimes take an age to start as people try and randomise an avatar to suit them. Each individual round is presented in it’s own style, with enough nice flourishes of animation to give the game a good bit of character. The questions themselves are well presented, too, with the video clips round a particular highlight.

The rounds themselves are well thought out, with a good variation on the types and the content of the questions. There’s a wide range of genres and years covered, and it’s nice to get questions about recent films as well as stuff from the fifties and sixties.

There are a few problems, though. Too many rounds wait for players to buzz in before revealing the four possible answers, this ends up in everyone just buzzing in really quickly to see the answers and having a guess, which sucks a little fun out.

There are problems elsewhere, too. The movie poster questions use the American posters. The question database is a little small, so you’ll see a lot of repeat questions after about ten games. There’s a lack of customisation options, so you can’t take out rounds that you don’t like, and there are a few bugs. When playing online I encountered the same crossword question about The Prestige five times in a row. There are also bonus points awarded at the end of each round, with people coming last getting pick-me-ups. This can be really frustrating for good players, but the non-film fan amongst my friends found it invaluable, keeping her in the game and in with a chance, where otherwise she would have stormed off in an angry huff. Because she’s a woman, and that’s what they do.

Online play was excellent, but now most players have memorised most of the questions and games are just a test of who can buzz in quickest. Chalk that down as another sign that there really needs to be some more question packs released pronto.

So, Box Office Smash isn’t perfect. But it’s enjoyable while it lasts, and I’m looking forward to Scene It 3. If they book some proper comedians (or me) to write the links, and buff up the number of questions Buzz could have a real competitor.

REVIEW EXTRA: LINKS I WOULD HAVE WRITTEN

I think you’ll agree, I’m the next Alan Carrs!