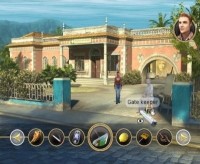 This point and click adventure game has had to survive not one but two conversions. Not only has it been converted from PC to Wii, but the speech has also has been translated from German to English. The change of format has gone smoothly – the controls work well and the visuals remain nice and sharp – but itâ€™s fair to say that some of the jokes have been lost in translation. You can imagine the German version being quite witty and tongue-in-cheek in places, but now the jokes seem a little cheesy. Not â€˜My dog has no nose / How does he smell? / Terrible!â€™, but close enough.

Never heard of the mystery of Tunguska before? Itâ€™s a real life catastrophe that has never been solved. Back in 1908 a large explosion with the force of approximately 2,000 Hiroshima bombs flattened an entire forest in the Tunguska region of Siberia. Possible theories include a fallen asteroid, a natural gas explosion and a black hole. Of course, some idiots are adamant that it was the work of aliens. Set in the present day, the father of lead character Nina goes missing while researching the event, and with the police unwilling to help she sets out to find his whereabouts.

There are some clever puzzles to solve, but like most point and click affairs you do often find yourself stuck, and have to backtrack, then randomly combine items in the vague hope of finding a solution. Fortunately text and speech can be skipped, so you donâ€™t end up hearing/reading the same stuff repeatedly when aimlessly clicking, and thereâ€™s also a handy microscope option thatâ€™ll show everything in a room that can be interacted with. Itâ€™s a bit po-faced at times – if you were born and raised on the likes of Monkey Island, Day of the Tentacle and Sam and Max then youâ€™ll probably wonder when the fun is going to start – but itâ€™s still definitely nice to see a game of this ilk on Wii. If youâ€™re hankering from some beard scratching then you can’t go far wrong with this.