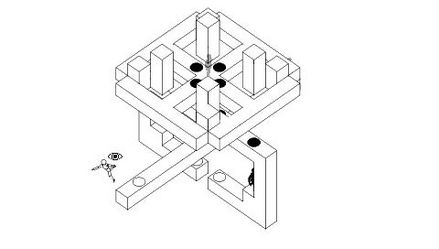 “Nice video / Shame about the song.” That’s probably the only thing I can remember from Not the Nine O’Clock News, which isn’t bad considering it was first broadcast when I was between the ages of -2 and 0 years old. It rather sums up echochrome though, which looked simply divine when it was shown in video form last year. A black and white puzzle game where changing perspective changes reality – it looked interesting, new, mature.

But I should have seen it coming. The black and white, the all lowercase title – it’s massively poncy, and that’s not often a good sign. What should have been a minimalist, mind-bending, but perversely intuitive puzzler, is actually just a fiddly little bugger.

The most popular game in Brighton

There may not have been a new Zelda or Mario shown at E3, but don’t despair – a new adventure game by Chibi-Robo creators Skip has been revealed in a recent issue of Famitsu. The best thing about this, ahem, colourful game...
Read Article
UK Charts 28 July, 2008

UK Chart Lego Indiana Jones – which has been riding high since release – has been knocked all the way from the top of the chart to #5, with Wii Fit sitting atop the top 40 once again. The rubbish WALL-E stays...
Read Article
Blog

A master’s degree in PSP

This Week’s Games Game You can’t have any new games this week because you’ll spoil your dinner. Oh go on then, you can have one: Buzz Master Quiz on PSP. But don’t tell your father.
Read Article
Reviews 23 July, 2008

UK Chart With the film now out, WALL E has shot up the chart from #16 to #2. Shame, then, that it’s a load of rusty balls – three hours is all it takes to see pretty much everything. Lego Indiana Jones...
Read Article
Blog

Would you rather watch (mostly glorified) footage of the titles shown at E3 rather than read boring words about them? Then a trip over to our YouTube channel should do you some good. Videos currently proving popular include Ubisoft’s new IP I...
Read Article
Blog 16 July, 2008

Sony at E3: Business as usual

We all know that Sony needs to show off something really special at this year’s E3. The good news is that they showed off more surprises than Nintendo did, with the biggest being MAG from SOCOM developers Zipper Interactive. Think Resistance 2’s...
Read Article
Load more posts