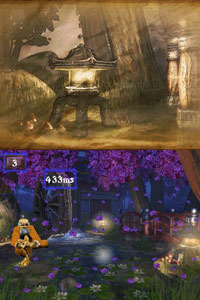 Can you imagine this: a game for the Nintendo DS, made up of short mini-games, which you’re supposed to play for a little while every day in order to improve some faculty? It’s an original idea the likes of which we’ve never seen before.

Except of course I’m lying. There are approximately as many brain training games for the DS as there are atoms in the average mug of tea. You can already train yourself in other ways too, and now you can train to be a ninja!

Well, not quite. This is, in effect, Reflex Training. But dressed as a ninja, and taking itself far too seriously.

The mini-games â€“ including nabbing flies with chopsticks, poking fireflies, and slashing bad guys with a katana â€“ are more tolerable than I’d imagined. They’re basic and re-used ad infinitum, but that’s to be expected from this sort of thing â€“ and it’s not really a great problem if you do just play it for ten minutes every day. After all, they’re tests of reflexes, not in depth adventures.

The periodic belt tests throw a selection of mini-games at you without notice, which is sort of nice in a sub-Wario Ware kind of way. And these actually grade you, which is handy, as there’s not a mountain of feedback from the standard mini-games.

Though the little talks from your ninja master are moderately impressive in terms of sound clarity, he’s terribly po-faced, and that hardly encourages me to go back to the game day after day. It’s simply more fun training my brain.