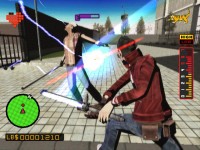 Travis Touchdown is a curious fellow. Heâ€™s a sleazy anti-hero of sorts, who lives in a dingy motel packed full of anime figurines and is on a mission to become #1 assassin by taking out the top 10 one by one. Pleasingly, thatâ€™s about as complex as the plot gets. You canâ€™t help but like him, even if deep down heâ€™s little more than a self-obsessed mass murderer, a little bit like TVâ€™s Dexter – a serial killer that only kills other serial killers.

The game itself is even more curious. Travis rides his flashy motorbike around the oddly deserted city of Santa Destroy picking up sub-missions and part time jobs (including lawn cutting, garbage collecting and… err, coconut foraging) but calling it a GTA clone would be way off the mark. There’s no shooting of innocents, car chases or anything of the sort – at best the city is just a glorified selection screen. Most missions take place in warehouses or other box-like environments, usually joined together by reams of corridors although there are often amusing surprises along the way. Once the next assassin on the list has been taken out it’s back to the streets to earn some money to pay off the next battle admission fee.

Now would probably be a good time to mention that No More Heroes is barking mad, which isnâ€™t a massive surprise seeing as itâ€™s from the minds behind Killer7. The menus are retro themed, as are many of the sound effects, while enemies satisfyingly explode into a shower of coins when vanquished. At the bottom of the screen thereâ€™s a little fruit machine – match three symbols and Travis can go mental, lobbing fireballs and jumping all over the place. Also, back at the motel you can watch music videos and play with Travisâ€™ cat, while saving a game is simply a case of visiting the nearest toilet.

A natty light sword just happens to be Travisâ€™ weapon of choice, which emits a familiar hum from the Wii remoteâ€™s speaker. You can also perform wresting moves by stunning an opponent then waving both the remote and nunchuk in the directions shown on the screen. Rather than attack by swinging the remote like a sword it instead merely picks up two stances – hold it up high for high attacks and down low for sweeping attacks. Itâ€™s a system that works pleasingly well and is all the better for being kept simple.

Other good uses for the Wii remote include holding it up to your ear to take phone calls and shaking it to charge up the light sword in a rather perverse manner. Boss fights are inventive and with no indication as to where you next battle may take you, thereâ€™s always a reason to keep playing.