Nintendo can’t really cope with being popular, can they? After years of not exactly failure, but certainly not runaway success, they’re probably just out of practice. 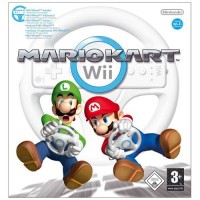 Mario Kart for the Wii is the latest product looking like it might be scarce. Gameplay.com had presold their entire initial allocation by midweek; Play.com and Amazon.co.uk have none in stock at the time of writing. These aren’t minor players.

It’s worth stepping back a second and considering what Nintendo have done. And what they’ve done is finally deliver on a promise they’ve been making for about a decade: to revolutionise gaming. Even in the UK.

I forget how the Nintendo 64 was supposed to change the very face of gaming, but it’s pretty safe to say that it didn’t. The GameCube was intended to expand gaming’s audience, by… having smaller discs that load a bit quicker. That didn’t exactly work.

The Nintendo DS and its touch screen has eventually invaded the pockets of the general public, but that’s more down to titles like Brain Training – though the interface unquestionably helped. Anyway the Game Boy was huge; I’m really talking about home consoles.

The Wii has gone properly mental though. I can’t count the number of people I know who would never have considered buying a console, but now have a Wii. Its success isn’t down to the marketing: interest has built up over time, chiefly through people having a go on someone else’s Wii and wanting one of their own.

More surprising is that I can’t think of anyone who’s lost interest in their Wii. It was accused of being a novelty, and though it is novel, it’s not being widely disgarded. Or is it? You tell me.