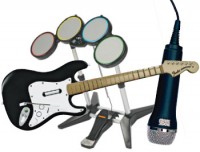 Rock Band is one of the most self explanatory titles in recent history. It’s a rhythm action game where multiple controllers link up to become … a rock band.

It’s been one of the biggest games over in the States for a while now, and it’s already sold one and a half million units. It’s very expensive, though. In the States a pack containing a guitar, microphone, drums and the game will set you back $169 or Â£85 in real money. Astonishingly, EA evidently thinks that’s not enough.

During an announcement that us Europeans will be able to grab a copy on 23rd May, EA also released some baffling price news. For a start, the instruments will not be bundled in with the game. Instead you’ll have to buy an “Instrument Edition” for Â£130 and get the game separately for Â£50. That’s Â£180 quid for the lot, Â£95 more than they pay in the States. The same price as a Wii.

Rock Band is a Xbox 360 PAL “timed exclusive” for now, however the PS3 version is not region locked, if you want to stop yourself being, quite frankly, swindled.