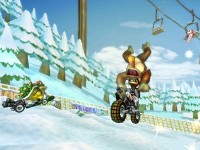 I only ever played the original Mario Kart on Daniel Johnston’s SNES. He was the kind of delightful child who would play ‘Saturday Night’ by Whigfield every time I went round, knowing full well I hated it. Still, he was called Johnson’s Baby Lotion at school, and that wound him right up. The fact that it didn’t quite work as an insult made it even better.

He always beat me at Mario Kart too – because, of course, I’d not played it as much as him. Not because I was just awful at it. Definitely not. So I don’t really have much in the way of fond memories of the first game in the series.

But now I like Mario Kart; I am ambivalent towards Whigfield; and I stopped speaking to Daniel Johnston after I walked out of his house because he’d sprayed me with his mum’s deodorant.

All of which means that I’m looking forward to the release of Mario Kart for the Wii this Friday. But I know literally nothing about what – if anything – is new for this version. That’s where the PR ‘fact sheet’ for the game comes in handy – all the selling points, none of the pointless made-up quotes from executives. So here we go.

Obviously the control is all motion-based, and Excite Truck proved that this is a good thing. Your Miis pop up as drivers, which is quite cool, but ultimately pointless. There’s online play over the Nintendo Wi-Fi Connection, but we’ve been there and done that on DS.

But what’s this? Motorbikes? MOTORBIKES! This is very cool news. There are probably reviews all over the Internet which could tell me whether this is a worthwhile addition, or about as revolutionary an idea as putting two characters on one kart. But I don’t want to know. Ignorance is bliss. I’m bordering on being excited about the release of a game, and I’m not going to jeapordise that.